The horse dentist paid a visit to the quarters today. Gwen went first. She didn't do too bad. She did need a little sedation and the vet couldn't get the speculum in her mouth, but other than that she was a good girl. Her teeth weren't that bad, though we don't really know what it looks like in the back of her mouth due to the speculum problem. She didn't have her wolf teeth pulled (she has 3), and it looks like she's going to sprout some canines. She's got some kind of crazy, throw-back mouth, I swear. The vet doesn't like to remove wolf teeth (self described heretic), so what she did do was smooth off those wolf teeth so they weren't as sharp. She wants me to try putting a bit in Gwen's mouth and see if it's really going to bother those teeth before we take drastic action.

Poor Coriander's mouth was really a mess. He had massive hooks on his teeth that were tearing up the inside of his mouth something awful, especially on the right side. He also had a pretty big overbite in the front and his teeth didn't match up at all. He had to get extra sedation so the vet could get the speculum in there and really get down to business. He actually took to the speculum pretty well, he didn't raise much of a fuss about it, of course he was sedated so that probably helped. I betcha he's going to feel lots better in a day or two when his mouth heals up.

Here's a picture of a mouth speculum. It looks like a medieval torture device, doesn't it? 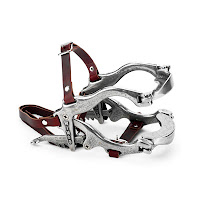 The vet wants to come back out in April/May to try to get a speculum in Gwen's mouth and see how the bit fits with those wolf teeth. She's also going to evaluate how fast Coriander's teeth grow and see what kind of float schedule we're going to need for him. The quarters did very well for their first float!
Ramblings courtesy of smazourek at 6:17 PM