I was so looking forward to summer, those long, warm (hot) days when I would be able to put in some serious time in the saddle. Most especially with Gwen, we're never going to get anywhere if I don't get on her back more often. So I was seriously bummed when my horses came up with HIVES a few weeks ago.

They started out small, just some bumps along their haunches where they lie down to sleep, but then they spread...

At this point I was getting really freaked out. My imagination started going and I was scaring myself thinking about them asphyxiating due to swollen shut airways and being blinded by their eyes puffing shut. I don't know about you, but when my horses don't feel good, I'm a wreak. I pretty much stop eating and sleeping and just fret all the time.

So I got the vet out to look at them and she was all "this is no big deal, bathe them and mow the pasture and they'll be fine." I bathed them (boy did they ever love that, NOT) and Mark went out the very next day and mowed the pasture (he's awesome), and thank goodness- the hives started going down almost immediately.

While the vet was out we did vaccinations. I mentioned to her that Gwen always has a bad reaction to vaccinations, she often has lumps for months after getting the shots. Because of that we decided to give her one at a time in her pectoral to see how she reacted. She got her rabies vaccine in her chest and the very next day it looked like she was smuggling an ostrich egg in there. ARGH! Sorry I don't have a picture, I only took one with my camera so I could text it to my vet with this message: !!!! (paraphrasing).

Fortunately the swelling was gone after a week and by that time they had both recovered from their skin allergy and feeling well enough to ride. I climbed up on Gwen and it was like sitting on a firecracker with a lit fuse. I got off after about five minutes because I felt completely NOT SAFE up there. But the very next day and she was completely different, she was relaxed and wanted to explore. I rode her into the back fields away from the pasture for the first time ever and she was great, I even braved a trot!


She might make a trail horse yet- as long as I can keep her healthy...


Ramblings courtesy of smazourek at 10:55 AM 21 comments:

I'll start this post with what everyone wants to see: A friesian.

So how'd we do? We tied for 4th out of 13 with a 65.5%. I got dinged on the stretchy trot circle, got dinged on the lengthenings- those needed more elasticity apparently- and I got dinged because I let his nose poke too far out. At least I know where to improve :)
Ramblings courtesy of smazourek at 1:43 PM 15 comments:

This Saturday I will be riding in my very first dressage schooling show. The friesian will be helping me make my debut at first level, test one.

If I can get a 50% I'll be pretty happy because I know I'm going to flub something. I did a dress rehearsal last weekend that went very badly. I got confused about the ride times, I thought I was supposed to get on the horse at a certain time, but I was actually supposed to ride the test at that time. Yeah, so it comes out a 10 minute warmup is not enough. For either of us. Good thing it was a dress rehearsal. Hopefully I got the crappy riding out of the way last weekend so I can ride normally again this weekend.

Even if I do ride like crap, I'm thankful that I'll have my local trainer there to keep me on track and that I'll be riding a horse that doesn't get show nerves. It's much better to start out that way than completely on my own with a horse that may or may not freak out.

While we're on the topic of dressage shows, has anyone watched any of the Dressage Festival of Champions coverage? You can watch the tests individually and, get this, the videos include the judges' scores on each movement. That way you can feel like you're playing along. Give each movement a score and see how you measure up. Personally I thought the judges were being generous, but I'm not an FEI judge so what do I know?

I recommend watching Steffen Peters and Legolas. His passage was amazeballs and his piaffe was one of the best I've ever seen in competition. Check it out: 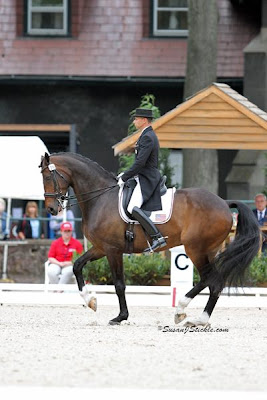 Too bad his canter work wasn't as good, but he's a young horse and Steffen Peters is a clicker trainer, so I'm sure it won't be long before all his movements are as good as passage and piaffe.

You can also catch Heather Blitz's ride on Paragon. Some of you may recall that I thought Paragon looked a little off lately, but he seemed a bit better last weekend. He still can't pull off the collected movements nearly as well as some of the other horses but he does have gorgeous extensions. That horse can move!
Ramblings courtesy of smazourek at 11:19 AM 16 comments:

I seem to have been having a lot of email discussions lately about the lateral cartilages and impacted bars, mostly about how to find and evaluate them. I was having a hard time articulating this so I decided to do a photo post about it.

First of all- why is this important?
How do you know where to look?

The easiest way to see the lateral cartilages is to just look at the heels of the hoof while the horse is standing on it. Take a look at these photos I snagged off some email groups I belong to. Most of these hooves are pathological- that is to say not sound. Not even close. But I tried to find the most extreme examples so you could clearly see how the lateral cartilages can be pushed out of their natural position.


Okay, now compare them to a healthier hoof. This shot is of Gwen's right fore, can you see the difference? She's a little contracted but not nearly as much as the other horses. There is plenty of room between her lateral cartilages, they aren't jammed upwards into her fetlock and you can see that they're pretty even from side to side.

In the next two photos I've got my fingers around the lateral cartilages. You can palpate the lateral cartilages and use them to help determine how healthy your own horses's hooves are. Are they wide apart or squished together? Are they mainly down around the coronet band or are they pushed up toward the fetlock? Do they have some flexibility or are they hard like rocks? 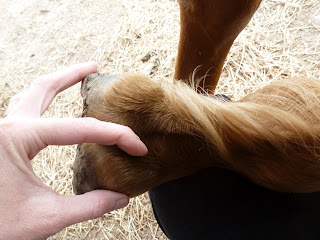 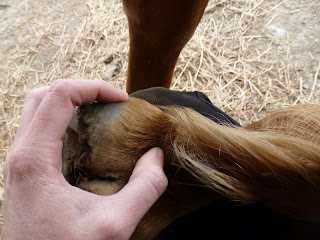 If your horse has lateral cartilages that look like any of the previous examples, it's time to take your hoof care professional to task. Trim those bars!
Ramblings courtesy of smazourek at 5:20 PM 16 comments: