Here's the hard part: How do you know that your horse has laminitis?

The first signs include:
Side comment: Some of you may remember that a while back Coriander went lame and a possible diagnosis was laminitis. Thank goodness it was just an abscess, but it presented much the same way, he was lame with heat and a pounding digital pulse. Sometimes different problems have very similar symptoms.

If you know the horse has had an event that would trigger laminitis, is displaying the signs, and you've caught it within 24 hours of onset you need to ice the hooves. I'm not talking about cold hosing the legs for 20 minutes 2 times a day, I'm talking fill a muck bucket or tank full of ice water and have the horse stand in it for 48 hours straight (keep replenishing the ice). 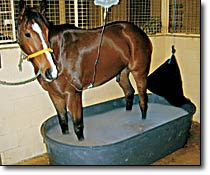 Chris Pollitt did a lot of research with cryotherapy (ice) and proved that prolonged exposure to the cold works really well to stop laminitis in its tracks. The theory is that vasoconstriction caused by the cold slows down the activity in the hooves enough that it gives the body a chance to right itself before more damage is done.

Now for those of you worried about your horse getting frostbite, Dr. Pollitt says this, "fortunately, cold-induced pain is not a problem in horses; they seem to lack cold nociception in their distal limbs. Horses in the current study showed no cold-induced injury or any clinical signs attributable to cold-induced pain, despite extremely low ice boot and tissue temperatures. Continuous aplication of ice and water to the equine distal limb for 48 h seems safe, effective, and well tolerated by horses."

I've also heard good things about For Love of the Horse's MMP Stop Solution, if given within 48 hours of the trigger it has also been known to lessen the damage from laminitis.

While you are icing or using something like MMP Stop you also need to treat the cause of the laminitis. If the horse is IR you need to restrict their access to sugar, that means putting the horse on a dry lot, using a muzzle on grass, and soaking your hay if you know it's high in sugar. If you don't know if your horse is IR but you suspect they might be, get them tested. It's a lot better to know now, before they have issues, than to find out later when they do.

If the laminitis was caused by SODS then the horse probably has an infection that will need to be treated with antibiotics and a bunch of other stuff that only a vet can help you with (Always feed probiotics if you have to put your horse on antibiotics- they kill the gut flora.)

Unfortunately if your horse looks like this:
it's already too late to ice or use the MMP Stop, the damage is done. Now you'll need some heavy duty pain killers and anti-inflammatories along with a pretty strict maintenance regimen to get that horse feeling okay again.

At this point in time you'll start hearing about rehabilitative shoeing, but that's for the next post...

If you've seen any other laminitis symptoms please let me know in the comments, if I get enough I'll make another post putting your experiences together. For instance, Kristen said this about when her horse was affected: Laz's laminitis was caused by Potomac which lead to endotoxemia...his sheath was SWOLLEN too during his high fever which is a clue to look for fyi.
Ramblings courtesy of smazourek at 6:48 PM