Remember the part where I said maybe this is the universe's way of getting me to sit back and watch someone else work for a while?  Apparently I'm not good at translating, because it now seems the message was "sit back and watch the mess that happens when you are rash and impulsive."  I have been vindicated in avoiding the use of a chain on Gwen, she's been extremely difficult for my barn owner to catch and I think it's because she knows getting caught = chain (there haven't been any marks on her nose so I know there hasn't been any abuse happening, she's just super sensitive).  There was an occasion where my horses were out for two days without water before Gwen would let herself be led inside.  That is SO not okay.

Gwen has also mysteriously started being deathly afraid of the shavings bag which means if she's in when the stalls get cleaned she doesn't get shavings.  They don't bed the stalls very deep in the first place so it didn't take long before she was standing on bare rubber.  She now has rub marks on the insides of her fetlocks.  NOT okay.

I need to move my horses as soon as I can.  The really obnoxious bit is that we have a house to buy with a nice pasture space and a barn already filled with hay, but everyone around me keeps dragging their feet when it comes to making it happen and it's making me CRAZY.  My only consolation is that we HAVE to move by July because that's when the lease is up on our apartment, but there's an awful lot that needs to happen by then.

Yeah, it hasn't been a good week for me.  You know what universe?  We're fighting now.  I just wanted you to know.
Ramblings courtesy of smazourek at 10:08 AM 2 comments: 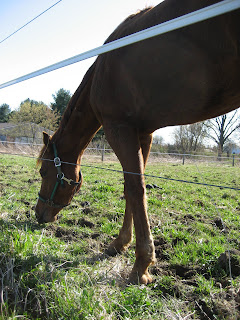 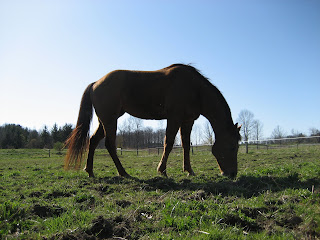 How do you like my new perspective? I call it the "stuck on my butt" series. I actually kind of like this angle, the camera was nearly on the ground under the fence to get these. I especially like those shots of my boy, he's very photogenic.

I'm very happy that Coriander is getting turned out without his halter on.  My BO was leaving them on to make sure she could catch them but I don't think it took her long to realize that he's just about the easiest horse to catch ever.  The last time I was in Florida, before the quarters came up to NY, I spent some time getting to know him a little better.  I wanted to see how he was to catch and groom so I turned him out in a little paddock and practiced a bit.  He was AWFUL to catch, I had to corner him in order to get his halter on and it took me at least 1/2 hour to do it.  But you know what?  ever since he's been up here I've never had a problem catching him, not once.

If Coriander had a motto it would be "I'm just here for the food."  I think this is the #1 reason why he's so easy to catch.  He knows that every time he goes in the barn there's a huge pile of hay waiting for him, so he's more than happy to go inside (that wasn't the case when he was in Florida, that's part of the reason why he's here).  He's actually started ignoring me when I visit outside the pasture because he's figured out that I'm not going to bring him inside to his hay.  That hurts a little, but he's got his priorities.  It's a different story if I visit when they're in the barn, my pocket full of treats wins him over every time.

The fastest way to my gelding's heart is through his stomach, does that make him a typical male?

The proof is in the pudding

Gwenevere isn't registered and she'll be 6 next week.  Fortunately for me AQHA is running a sale on registering older horses this year, instead of the $1000 it would normally cost to register her, it'll cost me $300.  It's definitely worth it, registration gives her some insurance in case something happens to me.  Once I'm back on my feet in June that will be my #1 priority (I was going to do it this month but grooming her up for the pictures is beyond me right now).

I was looking back through her pedigree to get some naming ideas (I'll have another post on this, I need some creative assistance), and I found something interesting.  Three Bars shows up in her pedigree 7 times!

Three Bars is considered one of the foundation sires for American Quarter Horses, btw he was a thoroughbred.  Three Bars himself was a successful racehorse and his owners were most interested in using him as a racing sire because his get were FAST.  Nowadays he's much better known for his non-racing descendants, his offspring have had huge influences in every facet of quarter horse life.  Notable descendants include Impressive, Zippo Pine Bar, Doc Bar, and Dash For Cash. 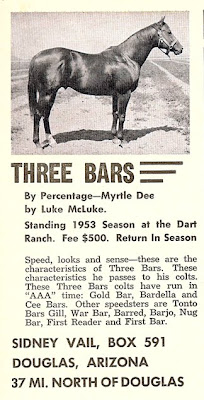 Anyway, since he shows up so many times in Gwen's lineage I was wondering about his temperment.  Horseman magazine ran a story about him in 1968, you can read it here if you'd like, but here's the bit I found most pertinent to my own horse:


"Three Bars was ridden and exercised under a stock saddle like
any other western horse—particularly during breeding season—
until about 1962, according to Vail.
"Yes, he was easy to handle but Three Bars was full of fire.
He was one of the nicest horses you'd want to have around.
But he didn't like to be brushed or have his feet trimmed.
He'd show a lot of white in his eye. If you didn't know him,
you'd think he was thinking about eating you up.
"Sometimes he would make a dive at you, but he wouldn't hurt you.
Like I say, Three Bars had a lot of fire to him. Guess that's what
made him live so long. I was with the horse for twenty-three years."
He showed a lot of white in his eye? Does this sound like anyone I know? 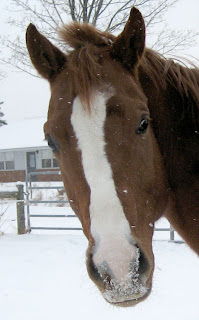 This is how much white there is in her eyes when she's calm.  When she's upset it goes all the way around.  This is actually my barn owner's chief complaint about her, Gwen always looks anxious because her eyes are always showing white.

It seems my girl has a good excuse: it's genetic.
Ramblings courtesy of smazourek at 9:48 AM 6 comments:

Personal update: Doctor appointment on Monday went well.  I got another X-ray that showed everything is healing as it should.  I got the staples removed (owie), and I got some new footwear.  Now I'm in a removable boot and not a cast, bathing is SO much easier.

Here's the bad news, well not really bad more obnoxious.  When I dislocated my ankle I did a lot of damage to the soft tissue down there.  The surgeon put in pins to hold my fibula to my tibia so the soft tissue will heal correctly, hopefully keeping me from ever dislocating my ankle again.   I have surgery scheduled to remove those pins on June 1.  I cannot walk until after that surgery because those pins could break if I try.  That means I've got 7 more weeks on crutches.  Awesome.

So what's going on with the quarters this week you might ask?  They got wormed yesterday morning.  I was a little anxious about it since they were so bad about the tubes last time.  I went to the store and got some especially "good" tasting tube wormer that some horses will eat if you mix it in their feed thinking that's how I'd have to get it into them.  I told my barn owner about this plan when I hobbled in Wednesday evening.  Thursday evening she told me she just gave it to them the usual way and they were fine.  No problems.  Huh.  Obviously her technique is vastly superior to mine, next time I'm going to ask her to worm them while I watch.  She told me how she did it, but I'm a visual learner.  I have to see it to get it.

That's not the only area where she's having an easier time than I do.  She's been using a chain on Gwen when she turns her out and Gwen's been responding well to it.  I was afraid to use a chain since she's so reactive (I didn't want to start WWIII) but it seems I shouldn't have been so worried about it.  Gwen respects the chain and hasn't been that naughty for my BO.

Was breaking my ankle a message from the universe that I need to take a chill pill and let someone else hold the tiller for a while?  I would never broadcast myself as an expert on horse handling, far from it, I still have tons to learn.  It seems that this is a good time to really learn from having someone else handle my difficult horse (BO loves Coriander btw, says he's the sweetest horse ever- which he is.). Good thing I still have weeks left to devote to learning.

Thanks universe, message received.  Think you can make your next message hurt a little less?
Ramblings courtesy of smazourek at 11:24 AM 2 comments:

The quarters are now desensitized to crutches (I never imagined that happening).  I can only hobble in and visit with them over their stall doors and fences but it's better than nothing. 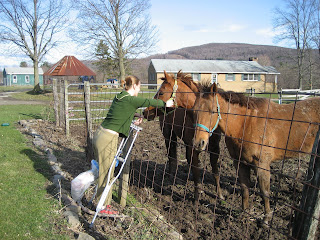 See, here we are chatting over the fence.  I'm pretty sure they thought I was there to bring them in, they were complaining their pasture had too much mud and not enough grass.  Sorry quarters, no such luck. (Yes, I have a "keep out the poo" bag on my leg.)

Ramblings courtesy of smazourek at 11:34 AM 5 comments: