Once you reach the 14 week mark of your pregnancy you are officially in the second trimester, and if you're lucky like I was, most of the horrible symptoms of the first trimester go away. That means no more all-day nausea and no more wish-you-were-dead exhaustion. Plus an added bonus, you can feel the little tyke move!

What does it feel like? Ask someone to come around randomly throughout the day and gently poke you right above your pelvis a few times with a finger. That's about what those first few weeks felt like to me. It is simultaneously amazing and super creepy. Or maybe I've seen too many sci-fi movies...

Unfortunately though, the second trimester of pregnancy brings it's own problems. For me, problem #1 was round ligament pain. Normally this is a sharp groin pain that most women feel when standing up or rolling over or something similar, it normally lasts for a few seconds and then it's gone. Well, let me tell you something my fellow riding friends: The stronger the muscles of your pelvic floor the worse you'll feel round ligament pain. Know what makes your pelvic floor muscles really, really strong? Horseback riding, especially dressage. Yay. So one Sunday morning, as I was trying to make myself breakfast, I ended up on the floor gasping and crying from intense groin pain that didn't quit for 10 minutes (my poor husband had decided to throw me in the car and take me to the hospital when it finally let up). When I called my doctor's office the next day, the nurse said that was normal. "But it put me on the floor!" I said. "Totally normal," she replied.

Uh huh, not acceptable. So I did some internet searching and found a website called Spinning Babies that had some exercises for stretching out those muscles and ligaments that were killing me. The first one is called the Inversion, it looks absolutely bonkers but it helped SO MUCH! It takes your head a few days to get used to it, but the stretch on my ligaments started to help immediately. If you can, keep this up during the rest of the pregnancy, not only is it a good stretch but it also helps get the baby head-down for birth.


Helpful exercise #2 were the pelvic tilts, these not only help stretch the pelvic floor muscles and ligaments but also stretch your lower back nicely in the third trimester. Feels SO good!

And finally, another exercise I couldn't do without, the Bird Dog exercise. These are for when your back starts to hurt and pain starts shooting down your legs. Give it a few days to a week to start working, but it will help the pain go away. This can be done in the third trimester, balancing becomes hard but not impossible.

After I started doing these exercises, the second trimester was a breeze for me. I even went for a few rides, much to Coriander's chagrin. Here's another tip: When you're six months pregnant, canter in two-point/half seat. Trust me on this.

At this point I've still got a month to go. We're almost ready to meet our little guy!
Ramblings courtesy of smazourek at 11:58 AM 20 comments:

This one is from Eurodressage, "Keeping Horses Barefoot: A healthy horse from the ground up." Once again, Shannon Peters is quoted as a barefoot advocate (because Shannons are good people), they've also got a few quotes from veterinarian Melanie Quick who astutely advises that horse owners do their research before taking their horses barefoot. She also says this, which makes me happy:

“I prefer horses living the barefoot lifestyle, as there is absolutely no doubt that when applied correctly it gives the horse superior hoof, leg and back health, enhanced soundness, increased career longevity, and optimizes their performance. If the competition rules can be changed to allow hoof boots in the dressage arena I think barefoot will be massive, and we will all wonder why anyone ever shod a horse.”

Yes, thank you Dr. Quick for saying it and thank you Eurodressage for printing it.

But then there are some other quotes that make me want to pull my hair out. Like this one from FEI Dressage Director Trond Asmyr, "the reason why hoof boots are not allowed in FEI Dressage events is because they may be masking potential unsoundness and it is the FEI’s policy to ensure that all horses taking part in FEI events are perfectly sound and fit to compete. There are therefore no plans to change this rule."

Seriously? Because shoes don't do the same thing? How many of us know of a horse that was not sound barefoot become "sound" as soon as a set of shoes was nailed on? Everyone? Your argument is invalid, Mr. Asmyr.

Just to clarify my position in this argument: If a horse is not sound totally barefoot then the horse isn't sound no matter how they go in boots or shoes.

Then there's this from farrier Michael Jakob that sets me a little on edge: "According to Jakob there are also various reasons why the horse may seem lame lame after a barefoot trim, but he says the main problem could be that the hooves are cut too short."

This bothers me because it's a gross oversimplification of why a horse would be lame after a trim. I suppose I should give the guy a break since this is a magazine article and he can't go into detail about what might be causing a horse pain, BUT here's what really bothers me about that quote: it puts the blame onto the shoulders of the trimmer without consideration of the health (or lack of) in the hoof being trimmed.

I'm planning on writing a blog post about this (eventually), but here's something everyone should know: If a hoof is really unhealthy, it cannot be returned to health without some level of discomfort. If someone tries to tell you otherwise, they either don't know what they're talking about or they're lying to you.

And then there's this, the hoof they used as an example in the article: 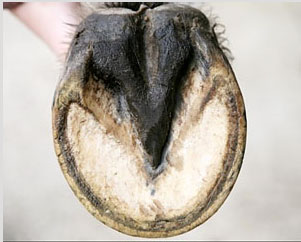 Now I know I'm being overly critical, but darn it, I have high standards. The heels are uneven, the bars are too long and edging towards impacted (That crack in the frog where thrush likes to live? Goes hand in hand with bars that are too long.), and the hoof wall connection is poor. Oh, and can you see the toe creeping forward? This horse is landing toe first because the bars make the back of the hoof uncomfortable.

Well, it's still progress. Head on over to Eurodressage and read the article when you get a chance.

Ramblings courtesy of smazourek at 10:47 AM 15 comments: