Before I get to the hooves in the photos I'd like to mention a few other factors that might play a part in hoof contraction:


Okay, onto the pictures.

Personally I think those hooves were contracted due to the pain from the bars (cue the broken record...). The bars are meant to give structure to the back of the hoof and to keep it from expanding too far upon impact with the ground. If the bars are left to grow unchecked, they can grow so long that, not only do they cause pain, they actually stop the back of the hoof from expanding. When the hoof can't expand all it can do is contract.

Lets look at some of those pictures a little closer, shall we? 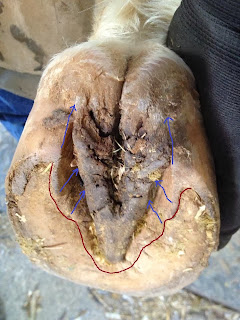 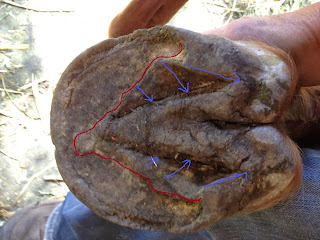 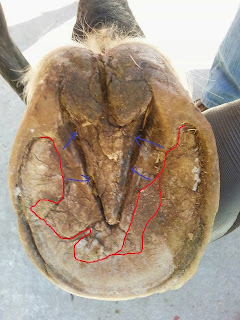 The red lines outline the bars, the blue lines are there to show how deep they've grown into the hoof. Keep in mind that you can't see all of the bar, there's probably quite a bit that has been pushed up inside the hoof too. The accordion folds are a tell-tale of too long bars. Those are compression folds that are created when the too long bars get squeezed between the inside of the hoof and the ground.

I know there are some out there that still don't think bars need to be trimmed, all I can say is that every time I've trimmed off overgrown bars one of two things happen: they either start licking and chewing (a sign that a stressor was removed) or they pick up a hoof I haven't gotten to yet and ask me to do that one too. I imagine the horses in the photos would react the same way.
Ramblings courtesy of smazourek at 9:27 PM 8 comments:

Charlotte Du Jardin and Valegro set a new freestyle dressage world record with a score of 93.975% at the London International Horse Show this week. She broke Edward Gal and Totilas' record, good for her!

Dang it, the video got pulled. Here's another one: http://www.youtube.com/watch?v=C9Iu8B4FRNk&feature=share.
Ramblings courtesy of smazourek at 9:46 AM 4 comments:

What's the deal with hoof contraction?

A word that gets thrown around a lot when it comes to hooves is contraction, but I think a lot of people new to hoofcare don't really know what that means. I'm going to try to help you out.


: the act or process of making something smaller or of becoming smaller

Normally when someone says that a hoof has become contracted they mean that the back of the hoof, the heels, have shrunk/become pinched like in these feet (I snagged these pictures off the web): 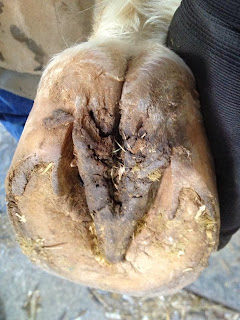 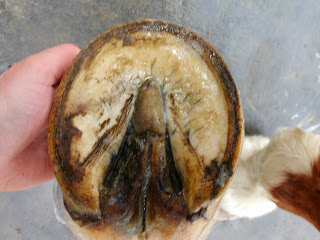 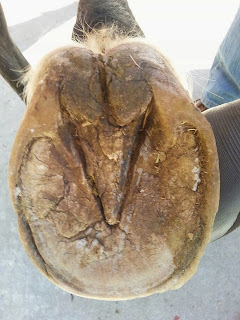 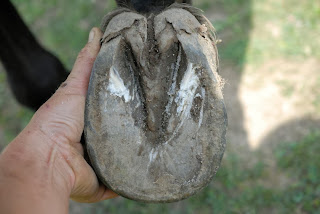 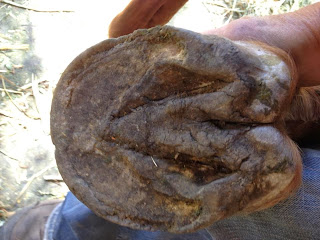 What's wrong with that? There are structures inside the hoof; like the coffin bone, navicular bone, live frog, digital cushion, and lateral cartilages that are all negatively impacted by hoof contraction. There's only so much room inside the hoof, and when that space gets smaller- through contraction- they stop functioning correctly. The lateral cartilages lose their efficiency at pumping blood, the digital cushion loses its shock absorbing function, the coffin bone itself can even be remodeled due to the pressure. All this measures up to a horse with impaired movement at best and dead lame at worst.

What causes contraction? Simple: The horse not landing on the back of the foot. Without the weight of the horse pressing on the heels, they don't expand.

How can you tell that a hoof is contracted? Take a look at the hooves above, they all have a few things in common. For one, they all have long toes. Yes, even the second one down, it's not as long as the others but it'll get there. Toe first landings = long toes as the constant pressure will stretch the lamina and sole. Second, look at the frogs, they are all narrow little triangles with ugly looking trenches in the central sulcus collecting thrush. Third, look at the bars, they are all very long. Lastly, look at the heel bulbs and see how they look like cleavage squeezed tight in a corset.

Here's a hoof that isn't contracted, can you see the difference?

Most of us know that horses should be landing on their heels because that's where the shock absorbers of the hoof are. So what would cause a horse to land on their toes instead? It's normally because of pain in the heels, you just have to figure out where the pain is coming from.

Let's go back to the thrush issue real quick: Thrush and contraction go hand in hand (or hoof in hoof). As the hoof contracts the frog folds up like an accordion, creating that deep crevice you see in these photos. Thrush just loves deep, dark crevices like that. Some people think (and I thought this myself once) that the pain from thrush can cause contraction. What I've learned recently points to the contraction happening first, making a nice, comfy home for the thrush to move into later.

So can anyone guess what I'd say caused the contraction in the above hooves?