I'm borrowing this from Fran Jurga's blog. Is this the future of laminitis hoof care?

At least they didn't nail that thing on. What are the stem cells supposed to do exactly?

I've been getting busy on the exercises that Katie gave me for Coriander: I've been using circles and shoulder-fore to try to get a specific canter lead, the canter cue is good but getting the left lead is still a bear. I'll get him bent nicely to the left, cue the canter, and he sneaks that right shoulder out almost every time. I've seen this horse pick up the left lead canter fluidly without me on his back, so I don't think it's a physical issue- which would point to me being the issue except that when I'm on the friesian right lead canter is harder. Conundrums.

I've got some cones set up in my makeshift field ring to work on the square/turn on the forehand exercise. I took Gwen with me to set them up on Sunday, and for the first time ever she was fine going that far away from the herd by herself (squee!)! I'm so proud of her, she's been doing so well lately. Trotting under saddle has become her new favorite thing, which means that she's done a lot of "I'm going to trot now" transitions without me. I made the mistake of rewarding her the very first time she spontaneously offered trot so now she thinks she'll get rewarded for it every time. I'll have to remember not to click her for spontaneously offering canter. We've been doing a lot of trot/walk transitions lately, I don't want to squash her forward but I can't have her running off without me either.  Horse training- not as easy as you'd think!

The other thing I've been working on with Coriander is jaw flexions. I've been merging info from a couple of different sources for this: Katie, Mark Russell, Mike Schaffer, and JME's excellent post here. We've been making progress at the halt, he's started softening and dropping his head as soon as I pick up the reins, but moving it's a different story- he immediately braces against me. We have a lot more work to do there.

It bothers me that there isn't more information available about jaw flexions, it seems like they're a basic tenet of classical dressage, Baucher was big on them, yet it's like no one talks about it, much less films it and puts it on YouTube. Seriously, this cruddy video is the only one I can find.
Plus, since no one is talking about it they don't tell you that weird stuff can happen. On Saturday I worked on flexions with Coriander and then asked him to walk off. Five strides later his front legs buckled like he was going to roll, I leaped off and kept him from going all the way down (no WAY is he rolling on my Ansur), but I couldn't get over how odd it was for him to do that. Then I found this video of a horse reacting to jaw flexions (the action starts at 19 seconds):
Was his attempt to roll a reaction to the jaw flexions? Poor boy, there I was mad at him for what might have been a neurological response.

I'll have some more information about these elusive flexions soon...

PS- please let me know if that obnoxious word verification thing comes up. I meant to get rid of that.
Ramblings courtesy of smazourek at 10:49 AM 24 comments:

One of my talented coworkers made this up for me. The blue squigglies in the hoof are supposed to represent the NY Finger Lakes. I like them because not only do they represent the lakes, but they also kind of look like sole pigmentation. What do you think? 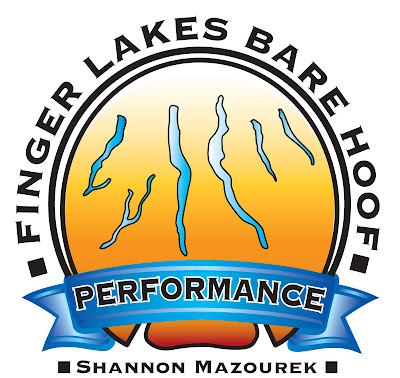 Update on the pathological hoof

Do you remember that tall, contracted hoof I posted a few weeks ago? Well I took a risk and sent my mark-ups to the trimmer who posted them online.

Why a risk, you ask? Because you never know how people will react to advice from a stranger.

Fortunately AC welcomed my comments and has worked very hard to make improvements to these hooves. Just look at how good they look only a few trims later! 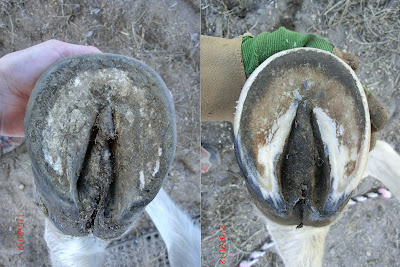 Keep It Simple, Stupid.
This is my new mantra. My local dressage instructor asked me after my lesson last night if I had any questions.

"Yeah, how am I supposed to go from riding this advanced horse to my guy who's barely at training level?"

Fortunately for me, I have a multitude of riches when it comes to dressage instructors. You may know that in addition to my local trainer, I also do video lessons with Katie. This is an incredible service that she offers to people like me that don't have a horse trailer and live far, far away from her. So far she's been the only "eyes on the ground" to help me with Coriander's training.

I asked her about the exercise I wrote about in my last post- the walking shortening and extensions- and she instantly nixed the shortening, saying the risk of ruining his walk was too high, but that it was safe to try the extensions. Well, they haven't been going that well and I've been getting worried/frustrated.  He doesn't understand the concept of extension, he just trots when I add leg (my local instructor thought that was great because it shows that he's responsive to my aids- she also reminded me that it takes a year to teach a horse to use his back correctly). So now I'm concerned that I'm just confusing the hell out of my horse. In other words, I've been freaking out.

What I normally do when I'm freaking out about horse related stuff is turn to Google, so I went looking for proper exercises for training level horses and I found this: 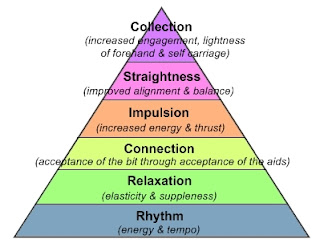 This image gave me a face-palm moment- of course we need to focus on rhythm, why am I trying to skip rhythm and relaxation to go straight to connection?

Oh yeah, because I'm learning about impulsion with the friesian right now. It made me realized that there's a huge gap in my education, Katie is busy trying to teach me about rhythm while the local instructor put me on a horse that's four steps up. I'm missing the bits about relaxation and connection. And thus my confusion.


This is good, that knowledge makes me feel a bit better about myself, but it doesn't really help me with where to go with Coriander. And then I remember (another face-palm moment) that Katie already told me exactly what to do, I just had to open up her last lesson and refresh my memory:
Beautiful, sweet clarity. This is a plan I can stick to without fear, confusion begone!
Ramblings courtesy of smazourek at 3:08 PM 12 comments:

Well, that was my intention at least, but more on that later.

My boy went on an extended vacation in November, part of that was to make myself focus on Gwen, the other part was that the time changed and it was simply too dark to ride after work anymore. Apart from a bare handful of rides, Coriander's had the last three months off. Not to say I haven't done anything with him in that time- we've worked quite a bit on head lowering and getting him to follow the rein aids sideways and down- but I did it all with my feet firmly on the ground.

Now I haven't had the last three months off, oh no. I've spent the last three months puttering around on a 2nd/3rd level friesian (I'm still training level- mind you), I've become accustomed to a certain standard of carriage and have become "discerning." Meaning that when Coriander starts to get sluggy and floppy I'm going to notice, and I'm going to want to do something about it.

First, my boy who was used to wandering around the trails on the buckle now has to contend with contact. Not much contact, but enough to have a feel of his face. Walking forward even into this gentle contact has totally blown his mind, he initially took some convincing to keep going forward.

Second, those leg yields that I thought he knew? Well he's got one to the left but going to the right? He immediately falls on his right shoulder with his hindquarters trailing out helplessly to the left. How did I never notice this before?

Third, I've now incorporated some equine pilates to the ride. Now when I throw in a halt I add the butt pinch to ask him to raise his back. Hopefully this will help him gain some of the back strength he needs to carry us better? Time will tell.

Coriander has a fantastic walk, it's one of my favorite things about him. Sometimes, when he really gets going, it feels like he's actually doing a running walk- it's wicked smooth and it feels like his hind feet are landing directly below his sternum. That horse can move! Unless he doesn't want to, in which case he plugs around like a beginner school horse with his feet glued to the ground. My first task was to get him to actually move instead of plug around -while having a feel of his face. Trying for medium walk from that was also a little difficult, I'm not really sure there was any change in his stride length at all. But the worst was when I tried to get him to pull himself together and shorten his strides.

"Would you like to halt?" he said. "No, keep going forward."

"How about a leg yield?" "No, keep going forward."

"Shall I pop my shoulders out?" "No, keep going forward."

He did eventually get a few strides forward, for which he was promptly rewarded. After this I kept it up, changing the length of his strides until for one brief, shining step he actually lifted his back and stretched his face forward into my hands. Holy cow, click and treat for that one!
Hey, it's just one stride, but every journey starts with just one step. Then he did something else great: When I asked him to halt and lift his back again, he actually stretched down and stayed in that position on his own- which I thought was pretty danged cool. Coriander may have used his back for the very first time and now needed to stretch!

Unfortunately since Tuesday, my back has been on revolt and I haven't been able to ride. As soon as I can ride again I'm going to keep exploring this exercise and see where it takes us. Self carriage school has begun!
Ramblings courtesy of smazourek at 1:35 PM 15 comments: