Ramblings courtesy of smazourek at 8:07 AM 12 comments:

I did not do this dissection, I found them posted on one of the list serves I follow. I wanted to show you these because it's one of the best dissections I've seen that show impacted bars in a horse hoof.

For any of you that may think I go on like a broken record about trimming the bars, or for any Ramey/ less-is-more followers who happen to stumble across this blog, this hoof shows what could happen when the bars are left to grow unchecked. 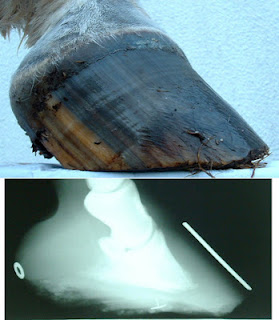 The side view and x-ray for reference. This is obviously a founder, I would say a completely avoidable one if only the bars had been trimmed. 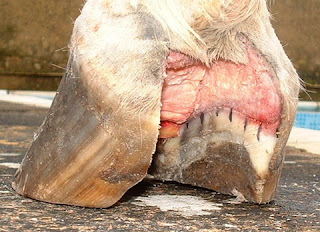 Everything under the pink area (digital cushion, corium, later cartilages, deep digital flexor tendon) is bar. Look at how they've squeezed the soft tissues into an incredibly small, tight space. How could the hoof possibly function normally when it's been squeezed like that? Can you also see how bars that have impacted like these will damage the DDFT where it travels around the navicular bone and connects to the coffin bone? 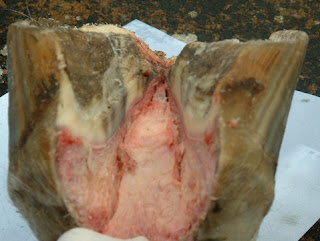 Yet another view showing just how tall the bars have gotten. That's almost 2 inches of bar! 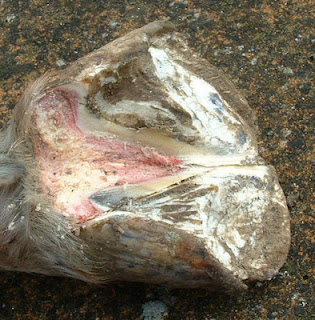 I think this one is interesting. Even though the walls are probably only a half inch too long (keeping in mind the dead material over the sole), the bars are at least an inch-and-a-half too long! Somebody was obviously trimming the peripheral walls down on this horse but they probably didn't touch the bars for years, if ever- and the horse suffered for it.

Here's a refresher: The bars are part of the hoof wall. Just like the rest of the wall they are composed of an outer wall, an inner wall, and laminae. Since they are part of the wall they grow at the exact same rate as the rest of the wall and should be trimmed in like fashion. Horses don't grow bar over sole and around the frog because "the hoof needs it," that's a garbage statement. If they are not trimmed they have to go somewhere, so they either grow up into the hoof like on this horse (hello navicular and founder) or out over the sole (which will create underrun hooves in no time). If you do trim the bar and it pops back out, that again isn't proof that the "hoof needs it" because cell division doesn't work that way, what that proves is that the bar inside the hoof finally had some room to move out.

Someday I'll let this subject go, but as long as there are people parroting misinformation about the bars I can't. So long as there are hooves like this out there I can't. This horse could have been saved if only someone had trimmed those bars.

Ramblings courtesy of smazourek at 10:29 AM 45 comments: