When the 'celery approach' doesn't work

Isn't it nice that the world didn't end last week? Now I can get back to discussing the hooves from my last post. Many of you caught on to my bit of sarcasm about the truly awful state those hooves have fallen into, this is what happens when the 'celery approach' goes bad.

For those of you who may not know, the celery approach is advocated by Nic Barker of Rockley Farm, the author of "Feet First: Barefoot Performance and Hoof Rehabilitation." Barker believes that people shouldn't touch horse hooves with anything sharper than a stick of celery; that all modification of the hoof should be done by self-trimming alone.

Let me just be clear on one point: I have a lot of respect for Nic Barker and what they do at Rockley Farm. I am inspired and impressed by what they achieve and many of the things Nic writes about leave me thinking. But I think their blog should come with a disclaimer: Do not try this at home without doing your research.

The celery approach works for the folks at Rockley because they've put a lot of time, effort and resources into creating an environment and lifestyle where the horses can self-trim their way to soundness. From what I've seen and read, they have three key pieces in place for this to happen.


If you want to embrace the celery approach to hoofcare, more power to you, just be prepared to spend a lot of time and money making sure your horse is living a lifestyle that will enable that. There is a reason that people have been using hand tools to trim hooves for hundreds of years, most domesticated horses don't get enough exercise on a variety of surfaces to wear down their own hooves, and overgrown hooves create a mess of problems.

*I did contact the owner of the horse from my last post and sent her an eight page document detailing what I saw going on with those hooves and a plan for bringing them back to health. Fortunately she agreed with what I said and I'm going to work with her over email to see if we can't get her horse sound again (he currently most definitely is NOT). Fingers crossed.*
Ramblings courtesy of smazourek at 2:42 PM 13 comments:

Hooves for the end of the world

I snagged these photos from an online barefoot trimming group. It was recommended to the owner a few months ago to stop trimming the horse (he had been sore after a trim) and just to let the hooves grow. Here they are a few months later. What do you think? Chalk this up as another win for the "celery" approach?

(You'll see some pictures where the hooves have been touched with a rasp- we'll just ignore that for now.) 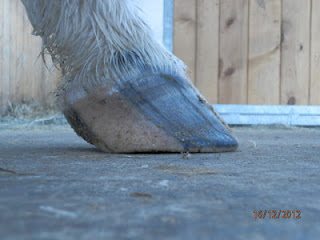 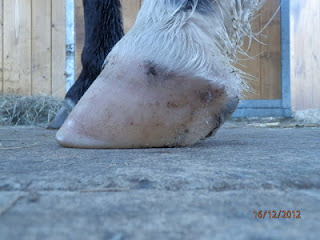 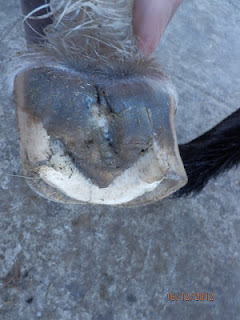 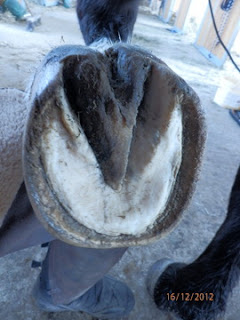 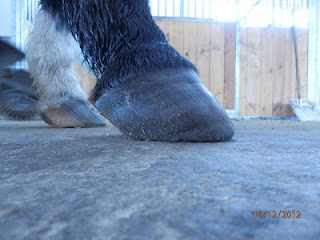 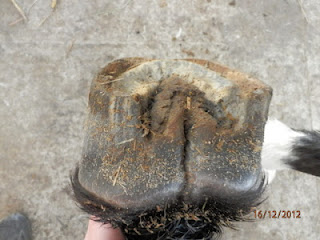 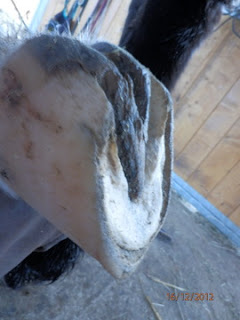 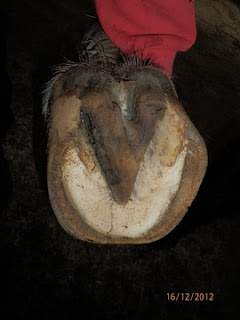 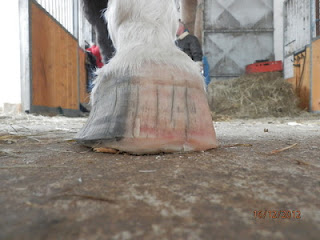 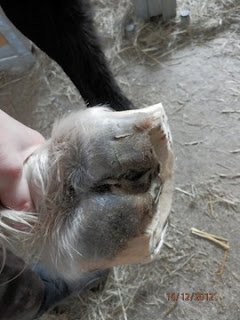 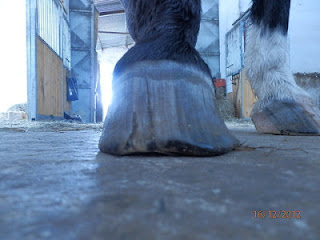 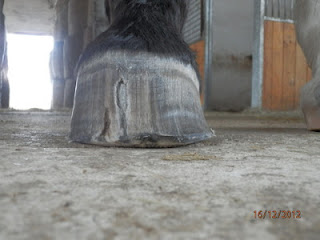 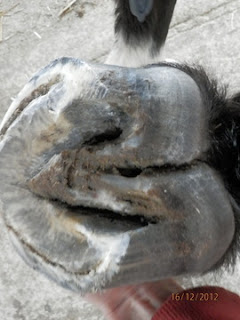 More on pregnancy: A few details I missed

In my last post I wrote about some of the lovely symptoms a woman may encounter during the first trimester of pregnancy. I realized a bit later that I missed a few things, mostly the side effects that are just annoying in the beginning but don't go away after the first trimester. Nope- they just get more obnoxious.

The breathing
You may not be aware of this, but pregnancy hormones also affect your lungs, increasing their capacity. What this means is that you might start breathing a bit heavier when you become pregnant. Or you may be like me and end up breathing A LOT heavier really early on. Seriously, I'd climb one flight of stairs and I'd be breathing like I'd just run a mile. I wasn't tired, I wasn't out of breath, but boy did I sound like I was. I was walking across campus with a coworker one day when she asked me if I wanted to slow down, "what, why?" I asked.

"Because it sounds like you're dying," she said. Oh.

Of course later on you start having issues breathing because you've got a baby kick-boxing your lungs. But that's for later.

The gas
When you get pregnant your hormones will also affect your digestive system, slowing the whole business down. When this happens you start to accumulate gas, which then needs to come out. Pregnant women start to sound a bit like one-person bands. One day, after burping for the umpteenth time after drinking orange juice I turned to my husband and said, "I burp after drinking orange juice, who does that?"

"My grandfather," he said. Excellent.

Fortunately for everyone around me, my gas tends to come out of my mouth, some aren't so lucky. When we got married, the best man's wife was pregnant and she stayed in our spare bedroom for the night before the ceremony. When we came back from our honeymoon a week later, the stench in that room was still bad enough to make your eyes sting. True story.

The peeing
Even if you've never been pregnant, you've probably heard about how preggos frequently need to urinate. You might think that starts later in the pregnancy when the baby gets big enough to start pressing on your bladder, but no, it starts immediately. Sure, in your first trimester you'll probably only need to pee once every two hours instead of the once every half hour/10 minutes/5 minutes that you'll experience later in the pregnancy, but even peeing every two hours gets a little annoying. Given this you might be tempted to drink less, but that is not a good idea. First of all, you'll feel terrible if you don't drink, your body wants that fluid for a reason. In the first trimester you're building the placenta- which is filled with amniotic fluid, and you do not want your amniotic fluid levels to be low. Also, your blood volume doubles and water is pretty necessary to that process too. So drink up ladies, and stock up on toilet paper!

Fortunately you probably won't pee yourself in the first trimester. Nope, that bit of fun is saved for the second and third trimesters. Joy!

Because I need a laugh this week... 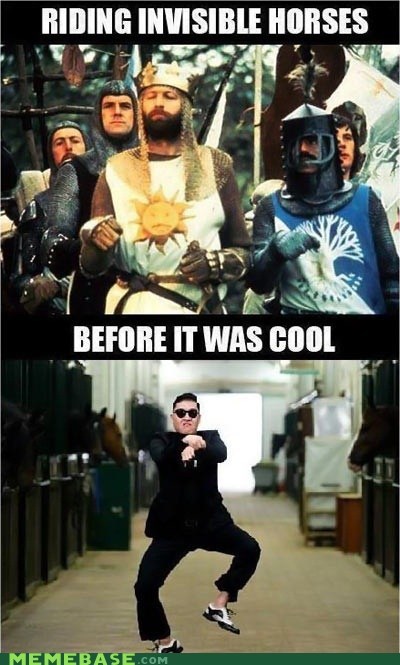 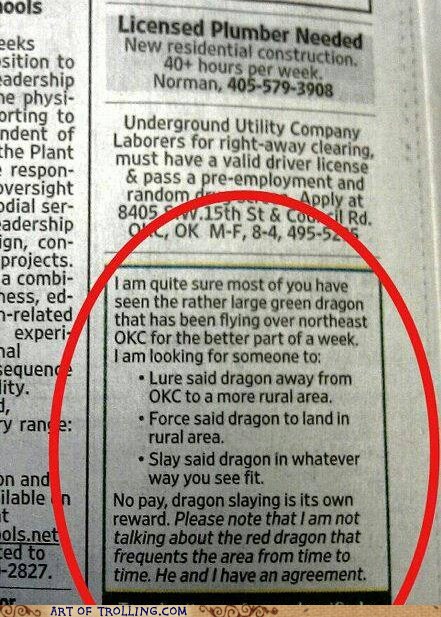 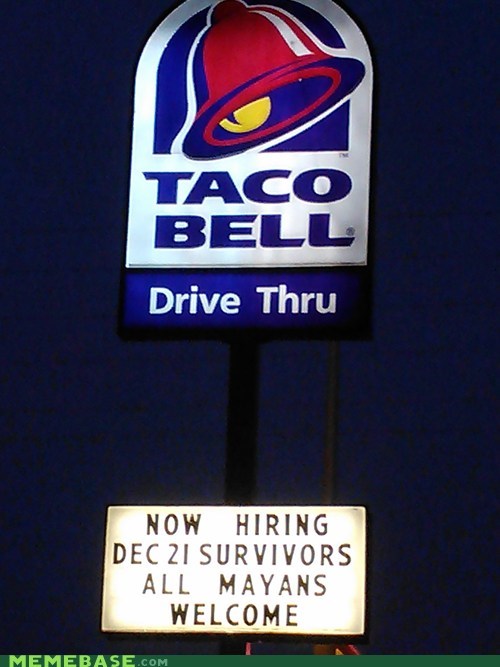 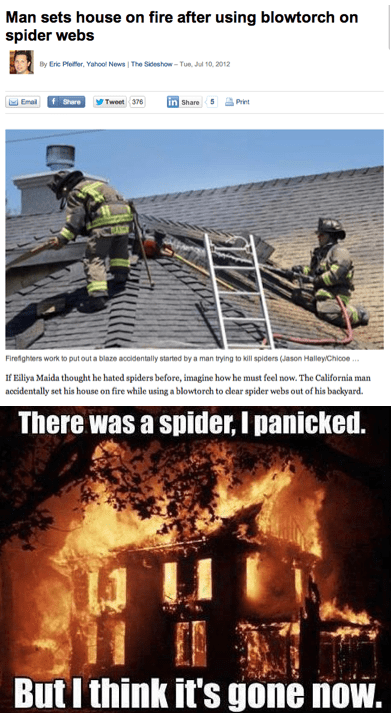 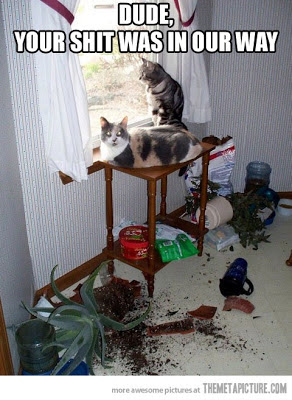 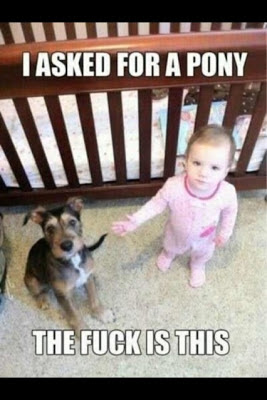