2010: the year I was broken and put back together again

January began with a wicked cold snap that made it hard to do anything with the quarters. Finally, mid-month there was finally a break and I decided to try longing Gwen. It was disaster, and I broke a finger by letting the longe line get wrapped around my hand. Obviously what I was doing wasn't working so I scoured the web for help. I happened to run across this post from April Reeve where she suggested using treats with nervous, flighty horses. I tried it, it worked, and was reminded of a book I had read on clicker training horses. The very next day I tried it and made more progress gaining her trust and cooperation in 10 minutes than I had for the previous 6 months. I've stuck with the clicker training since that day and I haven't looked back.

February was the month of snow, lots and lots of snow. I took advantage of another brief temperature hike to introduce a bit to Coriander. He took it in stride but was a little annoyed at how difficult it was to eat hay around it. Oh, and it snowed. 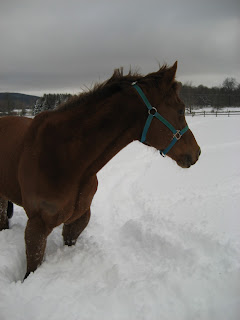 In March, clicker training was going so well that I started saddling Gwen, after a little anxiety over the girth, she decided she was okay with the whole process. She did so well that I screwed up my courage and slid on her bareback for the first time about mid-month. She was totally fine with it. A few days later I went to get on her again and the *&%$#%^ mounting blocks tips over and I fall on her. That wasn't good. I did manage to get her back over to it and slide on, but after that day she wouldn't go near the mounting block again. I make the brilliantly moronic decision to mount her from the ground using the stirrup. I end up on the ground with a busted leg.
I spent the month of April on crutches. I still saw my horses nearly every day but I couldn't handle them. Gwen and the barn owner's mutual hatred grew exponentially. My frustration with the barn owner also grew exponentially. 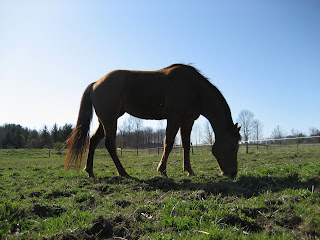 In May I dropped the crutches like hot potatoes and resumed handling my horses as soon as I possibly could, Gwen was immensely relieved. The barn gets a massive wave of new boarders, I went from having the place to myself to having to coordinate with people just to get my horses out of their stalls. I attend my first clicker training clinic with Alexandra Kurland and meet Kate G., who continues on as my clicker training teacher/mentor. I also meet Marjorie Smith and decide to take a much closer look at her website Barefoot for Soundess. 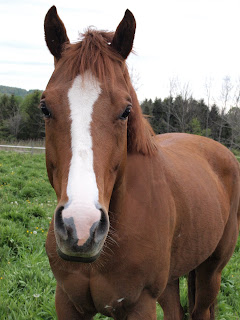 In June, after being unhappy with how my horses' hooves were chipping one week after the farrier came and trimmed them I decided to take their hoof care into my own hands. This is an ongoing process. I ride Coriander again for the first time since the accident and successfully use clicker training to help Gwen accept the flymask, walk over ground poles, and be wormed.

July was wicked hot and I end up having to hose my horses off nearly every day to try to cool them off. Coriander has a mystery lameness (I found an abcess hole in his left fore a few weeks later, go figure) so I don't ride him for most of the month. Gwen is introduced to the western saddle and doesn't seem to mind it at all. I finally reach my breaking point with the barn situation and decide to move my horses. The day I decide to move them I find a Craigslist ad for pasture board and, a week and a half and a crash course in trailer loading later, the quarters are moved to their new home. 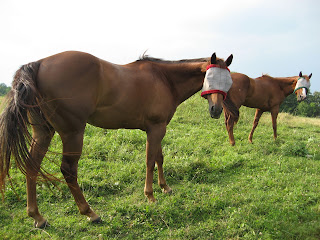 In August, Coriander is introduced to trail riding, which he thinks is the greatest thing ever, and we get our first canter under saddle. We go on our first group trail ride and he acts like he's been doing it all his life. I just about bust open with pride. Gwen proves that all she ever wanted was a herd and her anxiety about her brother leaving disappears. I am immensely relieved.

In September I try a new tactic to help Gwen with her herd boundness, CAT, which works out very well, Gwen is happy that I'm listening to her and I'm happy that she's gaining some self confidence. I take my first vacation since getting the quarters and travel to New Mexico. I have a rather bad ride on a lesson horse and gain an important insight about having all your wits about you when riding mares. The quarters get a new sidepull and Coriander gets overly excited in the pasture and stomps on my foot, cracking a metatarsal (ARGH). 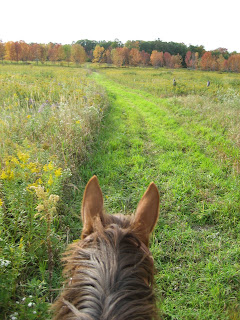 In October I attend another clicker training clinic and everybody wonders if I'll ever attend a clinic when I'm not broken. I meet a fantastic barefoot trimmer that does consulting and a dressage trainer that does distance learning. I finally find a pair of boots that fit Coriander, I find ticks on my horses, and Gwen continues to prepare for our eventual next mounting attempt. Coriander and I ride in our first show and get a blue ribbon!

In November, Gwen proves once again that horses do everything better with company as she does very well going on trail walks with her brother and Rocky. I am grounded due to back pain (Which I finally figured out came from my new orthotics, bye orthotics.), I learn that Coriander has thrush, and I introduce Gwen to more weight on her back via kitty litter. I remark on the passing of the Greatest Arabian Ever.

In December I realize Coriander's thrush was much worse than I thought and get schooled by the people at No Thrush, he wears boots for a week because he's dead lame but is on the road to recovery, his frogs should grow back better than ever now. I learn about scratches (Still trying to clear that darn stuff up, I'm giving it till next week and then I'm trying the Animalintex.) I do even more work to get Gwen ready for mounting (last night I leaned about 90% of my weight on her back, during which all she said was, "mmm, this hay is good." That's what I want to see.) 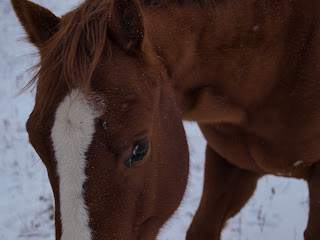 And that brings us to today. My thanks to everyone reading for all of the support and knowledge that you've shared with me this year. I had no idea when I started blogging about my horses that I'd have the pleasure of meeting and learning from so many wonderful people.

Goodbye 2010, even with three broken bones I had a great year, I can't wait to see what next year brings (though I can do without the breaks, 2011). I'm off to see my horses now. Catch ya later!

Ramblings courtesy of smazourek at 12:25 PM