I don't know if I've mentioned this before, but the quarters new home is on/around/next to a Christmas tree farm. Now that it's the season, the place has been hopping on the weekends with all sorts of people coming in to find their perfect tree.

While this does mean that Gwen is on a forced hiatus- it's not safe to take her out when there are small kids around- it's a chance to see a draft horse at work. Butch only works for a month a year, sure he goes on rides every once in a while for the rest of the year, but Christmas tree season is the only time he does what he was bred to do. 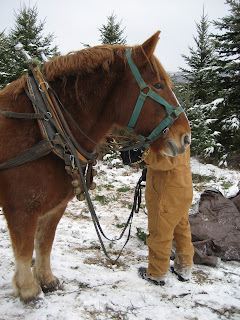 Butch was made to pull stuff and boy is he good at it. Somebody came by yesterday and picked out a really big tree, it had to have been about 20' high. Mark hooked Butch up to pull it out to the guy's trailer and all I can say is that I wish I got it on video. Butch built up a head of steam and charged  out of the field with that tree. Actually he didn't want to stop, he would have taken that tree all the way into the pasture if he could. It was at that point in time that Mark decided a bit was in order for Mr. Steamboat. The whole thing was a sight to see, let me tell you!

In other news, Gwen has scratches :-(
Ramblings courtesy of smazourek at 10:04 PM