The friendly people at No Thrush just advanced my understanding of thrush by leaps and bounds in three sentences. Here is part of their response to my pictures:

"The original photos tell the whole story. The sulcus and lateral groves are so deep, and the frog is so narrow, and there is such a concentration of thrush in there, that once the thrush and disease begin to get under control, that top layer will almost always shed. It is not unusual for the entire V to come off if the frog is extensively infested with thrush/disease."

After I read that I went back and took another look at his before photos. 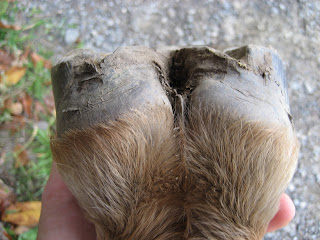 This is the view I should have been looking at. Just look at how deep those cracks go into his feet, all the way to the hairline! That is all from thrush. Look at Gwen's non-thrushy foot below for comparison, no deep crack there. 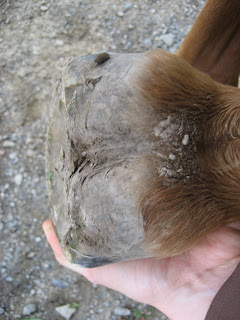 Now lets take a closer look at the pictures I posted last time. 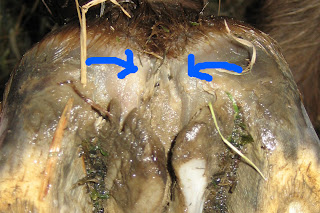 This picture proves that the No Thrush WAS working. See how the tissue is filling up what used to be a super deep crack? That was why it took so long for me to see results, his frog had a LOT of recovering to do from deep inside the hoof capsule. There was also the issue of me not knowing what to look for, though I think I have an inkling now.

Since I'm feeling a whole lot better now that his feet are on the road to improvement, I can go back and cogitate on the other signs of thrush he was exhibiting. Right off the bat I want to say that there was NO stink and NO black ooze in his feet. Don't let the lack of those symptoms fool you like it fooled me. Other than the clues my eyes should have given me when looking at his feet (and will from now on) I should have noticed other symptoms under saddle. For instance he was very footy on rocks, even little rocks. He had also started being a total slug in the arena which, in hindsight, was probably because the footing was getting up in those cracks and irritating his feet. It's a testament to his stoicism that he wasn't lame all the time.

I'm posting this in the hopes that I can help somebody else with thrush issues. If I didn't know this then I'm betting that there are a lot of other people who don't know it either. I encourage everyone reading this to pick up their horses' hooves and look at those heels and frogs. If they look anything like Coriander's then TREAT THEM NOW! Your horse will thank you.

I just stumbled on this post by an endurance rider that confirms my new understanding of thrush: Thrush does not always smell and it is not always obvious.
Ramblings courtesy of smazourek at 9:59 AM