Ugh, I've been sweating bullets over his feet for a few weeks now. At the recommendation of my trimming consultant, I used a specific product to fight thrush in Coriander's feet.

Here are his frogs before I used the product, you can tell that all was not well in Frogsville. 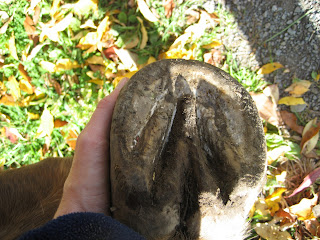 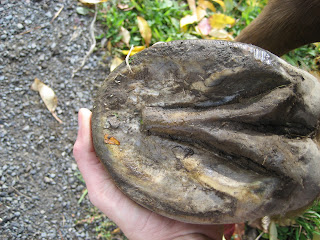 Here are his frogs about a week after I flipped out about how his frogs had disintegrated and decided to stop using that product. The pictures make his frogs look better than the reality. The flaps next to his heels weren't attached to anything and there was nothing between them, I could stick my whole pinky down the central sulcus. Holy Freaking Crap, what had I done to his feet! 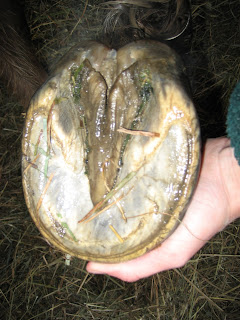 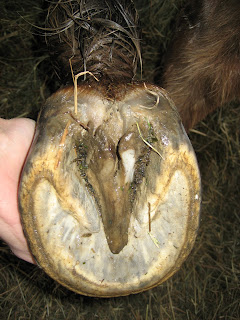 The last photos are after I started using Pete's Goo a week ago (a mix of antifungal and antibacterial creams). This week has been a little hairy. Once the rutted ground in the pasture froze up, Coriander went DEAD lame. Thank goodness I have the Cavallo boots because he's been living in them since Monday. That is so NOT ideal since I worry about nasty crud breeding the boots but he couldn't get around without them. Fortunately it looks like he's finally getting some frog growth again. I cut out the flaps at his heels since they were doing more harm than good and I think that's made a ton of difference in making him more comfortable. Comfortable enough to leave the boots off today, I'll have to see how he's looking tomorrow, but I've got the boots ready if I need to stick them back on. 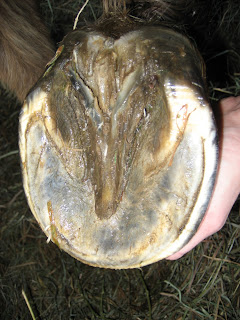 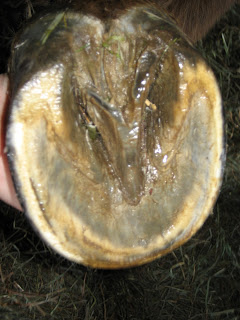 I contacted the company this week, basically telling them that their product appears to have destroyed his frogs. Here's the response from the president of the company:


Um, really? A little warning on their website would be nice. I sent them a document today with these pictures. I'll have to wait and see what they say about what happened. I'll decide about revealing the product name until after they've responded to my photos. At this point I don't know if their product really did the trick or if it was the switch to Pete's Goo. All I know was that I didn't see any improvement in frog growth until after the switch.

I'm just super relieved that he seems to be improving!
Ramblings courtesy of smazourek at 6:40 PM