My ever patient farrier was out today and I had him trim Gwen's feet for the first time.  I believe this is the second time ever she's had her front feet trimmed and the first time ever she's had her back feet trimmed.  So for the sake of safety and lowering the traumatic factor, I called the vet out and had her sedated.  She wasn't too bad.  He did the right hind first and after some initial leg jerks she calmed down and let him work.  Then she needed another dose for the left hind, but calmed down again and then was really good about those front feet.

Here are her feet before: 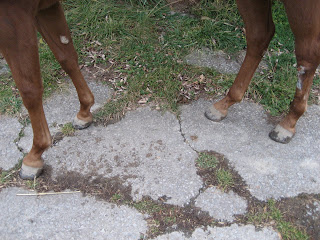 And here they are after: 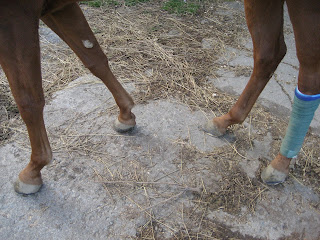 Coriander was basically a good boy today too.  Today makes his 6th trim.  He stood pretty well for most of his feet, but that right hind is still being an issue.  He tried to fall down on it again today (he knocked the farrier over the first time I had him trimmed, gave me a heart attack), but the farrier knows it's coming now and deals with it really well.  Hopefully my boy will learn sooner than later that little trick doesn't work.

So while I had the vet out I had her look at Gwen's teeth to see if they could be contributing to her weight.  Found out some interesting things.  A) I need to get her teeth floated; B) she has 3 wolf teeth that need to come out before I even think about getting her started with a bit; and C) she's going on 6 not 5. I don't doubt that Coriander needs his teeth floated too, so that will be our next adventure.
Ramblings courtesy of smazourek at 2:13 PM