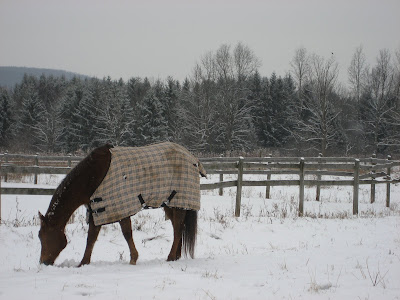 It's been 5 months since the quarters were loaded onto a stock trailer and brought up to NY from Florida. A lot has been accomplished since then.

-When he arrived, Coriander had only been backed maybe 5 times and had no idea what leg aids were. Now he very willingly walks and trots under saddle and steers almost completely from my leg and seat.
-Coriander has improved greatly on letting the farrier work without falling on him. He's now had his feet trimmed twice as many times as when I got him.
-When I got Gwen, it was very difficult to even put a halter on her. Now I can walk into her stall and put her blanket on without tying her and she doesn't blink an eye.
-Gwen wouldn't pick up her feet at all, now all I have to do is tap her front fetlocks and she picks up her feet for me. I can now pick out her right hind hoof, I'll get the left one when her leg is fully healed.
-Gwen has been introduced to vets and has learned not to freak out about needles.
-Both quarters have had their teeth done and it was completely trauma free.

I'm very fortunate to have found a great barn for boarding my horses that's also 5 minutes from my apartment. Through my barn owner's connections I've gotten a great, patient farrier and well-skilled, patient vets. I've learned some good stuff about barn and pasture management that I'm definitely going to use when I get my own place. Plus my barn owner is a great huntseat trainer. My riding has improved quite a bit under her instruction and I hope to be jumping full courses in the summer.

I wish I could be further along with Gwen by now, but obviously her significant leg wound has had a huge affect on that. But she's almost healed so now progress can be made!

-Start teaching Coriander seat aids for tempo this month.
-Introduce Coriander to the bit before April. I have a nice, french-link, full cheek snaffle that I'm going to start him in.
-Start Coriander cantering under saddle before his 10th birthday on April 1. This is completely weather dependent, it needs to be warm enough for me to ride him and get him ready for it.
-Start lunging Gwen with a saddle in February.
-Start teaching Gwen rudimentary steering from the ground with the sidepull in February, or possibly sooner.
-Teach Gwen how to free jump on the lunge in March.
-Introduce Gwen to the bit before April.
-Possibly back Gwen in April.
-Have Gwen walking and trotting under saddle by June.

I'd also like to try to show Coriander in some halter and walk/trot classes this year, but since I don't have a trailer I'm not sure how that's going to work. I'll have to work on that.
Ramblings courtesy of smazourek at 4:47 PM