Thankee-sai weather gods, thanks to you I got to ride again today. Here's Coriander in his big boy bridle: 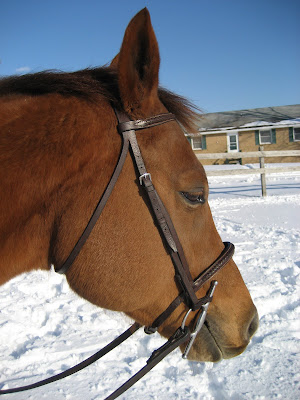 Isn't he handsome in it? He went very well today. He was attentive, relaxed and listening to my leg. He did have quite a problem bending though, it felt like I was riding a 2X4. I predict that there will be many circles in our future.

Take a gander at this: 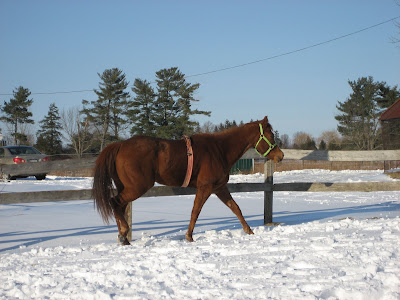 Yep, that's Gwen wearing a surcingle. She's making huge strides with her emotional control. You can see in the top picture that she's actually walking while wearing it (a first for her). The next picture represents a monumental improvement for her emotionally: 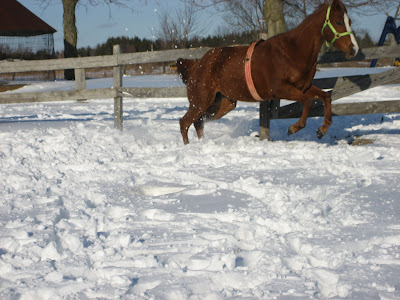 She's actually mid-spook during this picture. Why is this an improvement? Because that jump was it. Where before a spook always preceded a bolt, this time she CALMED HERSELF DOWN. She found something else to spook at a few minutes later and CALMED HERSELF AGAIN. That is huge for her and makes me feel a heck of a lot better about riding her. She was still going around with her head craned up in the air though, so I finished up the day by teaching her to put her head down and relax with the surcingle on (thanks to Mary for the tip).

What a great weekend!
Ramblings courtesy of smazourek at 4:57 PM