The temps have finally fallen below ridiculous here which means I can get back to work. My first order of business was to ride Coriander. I was a bit worried about how it would go since he hasn't been ridden in a week but he was pretty good. My lesson about no unrequested forward appears to be sinking in- we only had to circle twice. We had some interesting transitions though, we're still working on getting a specific lead so I've been trying to incorporate a lot of canter transitions into our rides. I asked for a right lead first and got the left, then I asked for the left and got the right. Either he was feeling contrary or my body control was out of wack. I'm guessing the latter (it's always the human, right?).

After our ride I got Gwen out and fed them dinner, then I hooked her up for some ground driving. I'm really enjoying doing this with her. If she's never comfortable being ridden I could still have a ton of fun with her ground driving. How cool would be it be if she could do all the upper level dressage work on the lines? Pretty darn cool, and she would find it easy. I may just do that anyway...

Back to business- Mark was trimming trees in our normal area so I took her out to the other Christmas tree field, the one she's never been all the way through and finds a little nerve wracking. She was nervous when we walked in (we have to walk in a little alley through a hedge), but she quickly got over her nerves and put her "exploring hat" on. I actually had a hard time turning her around to come back because she wanted to keep going! Love that.

She had a bit of a scare on the way back though: 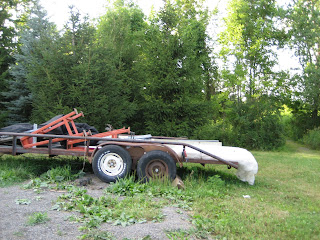 "ZOMG! There's a WHITE THING on that trailer!"
She did her best "Arabian in a halter class" impression: Arching her neck, snorting, bugging her eyes out of her head, spinning and bending all over the place. If it was a shiny white thing I would have ushered her away from it (because of her sensitive eyes), but this wasn't shiny so we got to play Touch The Goblin instead. Can you step toward it? Yes, click and treat. How about closer? Closer still? Finally she got right next to it and I asked her to target on it. As soon as she did that, the fear was gone and she discovered that there was grass all around it. "What white thing? All I see is green." Love that too.

Here's what I don't love: 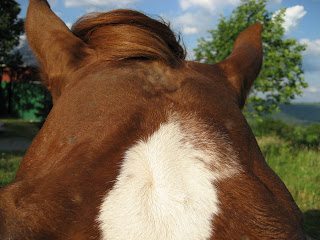 Gwen's getting rubs from her fly mask.
She has SUCH sensitive skin that I'm not surprised by this but I wish it weren't happening, we're still right in the middle of bug season and I don't want her to get eye or ear problems from the bugs. I've still got the old style mask that don't have the ear covers that I could put on her, but I don't like how much more difficult that thick, white mesh is to see through than the finer, black mesh on the new ones. For now she's wearing Swat eyeliner until her face heals (the clear Swat, not the pink stuff). She's been very good about letting me put it on but now I'm concerned that the Swat will damage the skin around her eyes.

Ugh, I love summer but I could do without the flies!

Ramblings courtesy of smazourek at 11:59 AM