This post is for in2paints (and anyone else who is interested): A moderator for one of the listserves I read posted this last night and I thought it was a really good explanation of forward foot syndrome and how to fix it. Walt's words are in black. You can find some more info about it on Jenny's page. 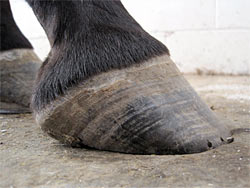 With all the rest, one additional problem all newbies to trimming face is semantics. Those of us who are used to talking "horse" and "hoof" throw terms around easily, and for the most part we understand each other -- but it takes some time to reach that condition. Some say it's almost like being suddenly dropped into the east end of London where cockney is spoken. Cockney is the nonstandard dialect of English spoken by many of the residents, who understand each other, but to those who haven't been there for long it almost sounds like a foreign language, and it takes some getting used to. Well, talking horse isn't quite like Cockney (though some of our spouses may think so). But I'll grant you that "lowering" heels and "bringing them back" at minimum sounds like a dichotomy. Just stick with it, and "horsespeak" will eventually rub off on you.

Meantime, the two primary dicta of hoof care are "bringing the toe back" and "lowering the heels". These two actions alone go far in assuring proper foot function. They are both "little things", easily accomplished, but are extremely important for proper foot function, and unfortunately, many trimmers fail to do so. I'll try an explanation without graphics -- which can be hard for both of us. As the foot continues to get little or improper trimming, the toe tends to grow long and the heel forward. The heel would actually be growing high, but the forces pulling everything forward also bend the heel tubules and bring the heels forward instead of downward. Other symptoms develop, eventually, like curvy, laid-over bars, and a long, thin, pencil-like frog. This condition is known as Forward Foot Syndrome (FFS).

Let's get to the heel -- too high / too far forward. The easy one is lowering the heels -- that means they've grown too long (but their tubules are still straight, not bent forward -- more on that in a moment). Some trimmers allow long heels in order to induce a certain "way of going" for the horse, for appearance sake while moving, mostly. Problem is, a high heel forces the coffin bone's tip to tilt downward. Coffin bone should be close to ground parallel so that the horse's weight bearing down on the sole is evenly distributed over the broad expanse of the sole. A lowered c.b. tip puts most of the weight-bearing load on the sole under the bone tip. That's got to hurt, it pinches the sole itself, and ironically, it can cause a heel-first landing which we DON'T want in this case -- because it's an attempt by the horse to ease his discomfort in the toe area. So keep the heel height down to a point where when the foot is properly balanced, the c.b. is ground parallel. Where is that point? You'll end up finding it on your own horse, but you gotta start somewhere. There is a lot written
about heel height, and several plausible methods for keeping it just right: I think a good place to start is to trim it down to the point where a healthy frog will touch ground at the same time the heel buttresses do so. If the frog isn't suitable as a reference, you can carefully scrape all the dead sole you can get to out of the Seats of Corn, and trim the heel buttresses to be on the order of maybe 1/4-inch higher than that live sole plane in the Seat.

Now how about bringing the heel back? This is a little more complicated. As FFS develops, the toe grows long, the white line actually starts to stretch around the toe, and the heel is pulled forward. But the heel starts out growing at a downward angle. It keeps on growing if not trimmed or worn, and with FFS, it makes a rather sudden direction of growth change from down to forward. From then on, it continues to grow (tubules get longer), but the direction has become forward. Consider a broom: prepare to sweep, and hold it vertical on the ground as you press downward. Because of the broom's "tubules", let's call them, being vertical and supporting each other, there is good resistance to downward pressure. That's what we want in healthy heel buttresses. Now lean the broom at an angle and continue to press straight down. The broom "tubules" now bend en masse along the ground, and there is little resistance to your pressure. That's what we DON'T want to happen to the heel tubules in an FFS foot.

So what if they do bend forward, you ask? Well, the horse still supports himself on his heels, but because the lowest point on an underslung heel (which takes the horse's weight as he moves) is not on the ends of the tubules where the strength lies (the broom analogy?), but rather somewhere part-way down the tubules, the part that's actually on the ground, where there is no supporting strength. We need to correct the condition, which can take some time. The objective is to get tubule ends in ground contact so they can do their work. Proper trimming of an underslung heel requires shaving off a little at a time -- you'll be taking off what amounts to the side of the buttress -- until you've created enough shorter tubules to begin to take the horse's weight comfortably. You cannot just rasp off all the bent-forward heel tubules.

This heel buttress repair procedure is much more complex and time-consuming than taking back the toe, but both are necessary in an FFS foot. It's a major reason for not allowing FFS to develop in the first place, and all it takes to prevent it is rendering a proper trim. At EVERY trim, take the toes back and trim the heels, even if it's just a very small amount. For maintenance trimming, you can regularly take the toe back with vertical rasp strokes, removing the outer layer between roughly 2:00 to 10:00. Remember, because of the toe angle, you're actually removing very little of outer wall layer tissue. This, together with a rocker will help keep breakover back toward the frog tip, but you're also leaving the inner wall layer intact and at full strength to help support the horse as he moves.

I know that this has been rather heavy. I hope it's clear enough for you. Don't worry too much -- this isn't rocket science, it's mostly just common sense.

Walt
Ramblings courtesy of smazourek at 9:40 AM