The nice thing about really healthy, sound hooves is that they are resilient. For instance, Gwen has never been sore after a trim, ever. Which is really amazing considering how many times I've screwed up. Fortunately for her, I studied and documented and kept improving so I didn't make the same mistakes over and over. For a sound horse, one bad trim shouldn't hurt much, a series of bad trims will probably ruin them.

A "sound" horse is a different matter. This is the horse that most people think is sound but really isn't. Coriander falls into this category, nine years of no hoof care (before I got him) on top of halter horse breeding have given my boy less than perfect hooves. That poor horse is my trim barometer- if my trim is a little off he'll show me. Sometimes I feel like a mad scientist trying to figure out exactly how he wants his hooves trimmed: leave the heels higher here, leave the toes longer there. It takes trial and error to keep that horse happy.

It's my personal opinion that there are a lot more "sound" horses out there than sound. When I go out to trim a new horse I always ask the owner to lunge the horse for me so I can do a lameness check. Most of the time I find that the horse is a little off on one foot or another- but the owner never saw it! Now, I am not an expert on diagnosing lameness, I think people just get used to seeing their horse move a certain way and think they're fine. And really, here's where the problem lies for the trimmer: If the owner already knows their horse hurts then they can usually handle a little soreness after the trim if they know healing is happening, If the owner doesn't know anything is wrong with their horse then they'll probably freak out.

Here's a short list of what I consider to be signs that your horse might only be "sound." I'm not saying that all of these are definite signs of unhealthy hooves, just that they are often correlated:


Want to read a little story about me screwing up? Of course you do. I trimmed a horse that I knew was lame and unhealthy but the owner was completely clueless; thought the horse was perfectly healthy.

Here she was before: 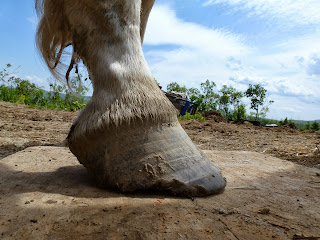 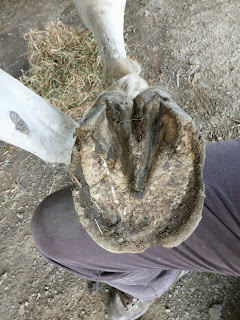 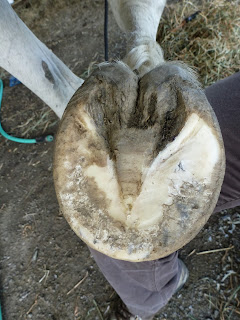 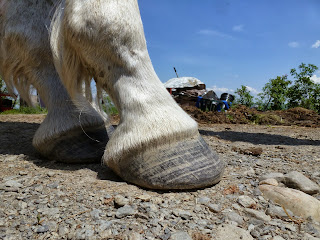 I learned a lot from trimming this horse, because she hurt after the trim and the owner flipped out. I learned that you can do the right thing for the horse (this was the trim she needed, after she got past the soreness she moved better than she had in months) but if you don't prepare the owner it's all for naught. I also learned (after consulting with my mentors) that the growth rings showed this horse was foundering- they are further apart at the heels and starting to bunch together at the toes. Which is not surprising considering the horse had been taken away from a place where she was starving and thrown immediately into spring grass. It was just a bad situation all around, basically the owner was a neglectful ________.

If I had to trim that horse again (I wouldn't) I would leave the toes and heels a little longer to try to avoid some of the short term soreness. Chances are she would have been sore anyway. Live and learn.
Ramblings courtesy of smazourek at 10:55 PM