I happened to mention to Kate G. that I'd bought an Ansur and was waiting rather impatiently for it to arrive when she said, "Hey, I've got an Ansur Classic. Would you like to borrow it?" Why yes, yes I would.

The first time I popped it on Coriander I put a nice, think pad under it- to give him a little extra protection in case he needed it. I walked him over to the mounting block, put my foot in the stirrup and prepared to swing my leg over.

*First mistake: Putting my foot in the stirrup to mount.

It slid right down his barrel and I plopped back onto the mounting block. I got down, put the saddle back, and then just lifted my leg way up over his back and got on without the stirrup. We then ventured out to the back fields so I could get the feel of it.

*Second mistake: Putting a thick pad under it.

I felt like I was sitting on a skating rink, I just couldn't get that saddle to stay put in the middle of his back. The next time I took it out I put the thick pad away and got out one of my regular, thinner pads. This worked better but there was still some slippage. This time I determined that I didn't have the girth tight enough (I have a rather bad habit of riding around with my girth too loose. I reached down after cantering during a lesson a few weeks ago and found I could put my fist between the girth and the horse, whoops.) Can you tighten a dressage girth while you're sitting in the saddle? I couldn't figure out a way to do it so I left it alone and tightened up the girth more for the next ride.

With the lighter pad and the tighter girth the saddle finally stayed put. But now I had another issue, I couldn't get my stirrups even. I think I adjusted my stirrups 5 or 6 times that ride until I finally remembered that I was using my cruddy, spare pair of leathers with a ton of random extra holes- there was probably no way I was going to get those stirrups even.

For the next ride I pulled my good leathers off the Crosby and put those on. Finally! I could get my stirrups even. Feeling successful, I decided to take Coriander out for a longer trail ride. Twenty minutes in my left knee started to ache. Then it started to hurt, ALOT. I had to pull my foot out the stirrup and keep shaking my leg out to ease the pain. That wasn't cool.

I've decided that the Ansur Classic isn't for me. It was super comfy under my bum but I think the lack of a twist was pushing my thighs out wide and putting too much torque on my knee, causing the pain. This saddle was really much wider than anything I'm used to sitting in. I also don't think Coriander liked it that much. He started taking off as soon as I settled in the saddle, something I thought we'd taken care of months ago. He'd also shoot off down the trail ALL THE TIME, especially when we were heading for the barn. This was something quite new for him. Either he really liked the way the saddle felt so he wanted to move, or he really didn't like it and wanted to get back as soon as possible so I'd take it off. It was odd, that's for sure.


Fortunately the saddle I'm waiting on isn't built like the Classic. It has a twist, which I like, and a gullet, which Coriander seems to like, so we should be just fine. There's still the seven day trial period if it really doesn't work out, but I'm pretty confident it will.

Here's a bonus pick of Coriander playing with Butch, something they've taken up just recently. I need to bulk up on my super spy skills so I can get a better picture next time. You know playing horses- they stop as soon as they know a camera is nearby. I'm happy that he's got a play buddy, but I wish Butch would leave his fly mask on. There's now three missing fly masks floating somewhere around the pasture. 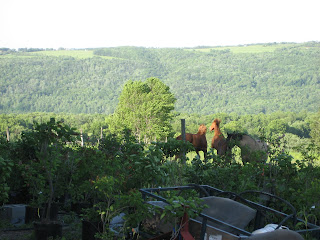 Ramblings courtesy of smazourek at 1:30 PM