Finally, the reason I hauled out to Ohio- to be a Mark Rashid groupie.

The first demo he had was on effortless transitions. There were three horses there, an English rider on a bay horse that had a problem holding the canter and couldn't pick it up from the walk, a quarter horse mare that was "lazy" in her canter transitions, and a little cob, excuse me- Gypsy Vanner, that had only a handful of rides under saddle.

It was obvious from the outset that the cob was having some issues, Mark worked with her on the ground before the rider even got on.

She didn't feel much better after the owner mounted so he worked with her on her hands and then sent her to work with his wife one-on-one while he worked with the others. I wish I could write more in depth about what he told her but a lot of it went right over my head. Here's the gist: Don't release on a brace and soften your feel.

Here's what he said about getting effortless transitions: Think of the rhythm you want in your mind and feel it in your body before you give the aid. If your horse is walking you should think/feel the 4-beat rhythm, before you ask the horse to trot think of the 2-beat rhythm and get your body ready for it. If you and the horse are thinking together you won't even need the aid, the horse will just make the transition picking up on your intention. For the canter focus on the 3-beat.

He said that the problem many people fall into is thinking of the words for the gaits like "walk," "trot," and "canter." But horses don't think in words, if you focus on the rhythm and the feel of the gait it will make more sense to them.

He had the riders move around him in a circle and told them that at point A they were to start thinking of the new rhythm and where they wanted to go, at point B they were to make the transition. If they got to B and the horse hadn't changed the beat then they were to apply the aid. It didn't take long at all before they didn't need to apply the aid, the horses had already transitioned by point B.

The English rider, whose horse couldn't transition to the canter from the walk previously, stepped into canter almost immediately during this exercise. You should have seen the smile on her face, I think the people sitting way up in the back of the stands could see it. The little quarter horse mare was also making super smooth transitions between walk and trot. Unfortunately she was lame, and got lamer during the course of the demo so Mark had her quit early (Sadly I saw this horse and rider do a couple other clinics through the weekend. She must have been buted up to her eyeballs. Sad that the owner had so little consideration for her horse.).

Here's another thing Mark said that really stuck with me about how to ride with the rhythm. The rider's seat follows the hind legs of the horse in a 2-beat rhythm. So when the horse walks your seat slides forward with the hind legs, right slides forward with the right hind, left slides forward with the left hind. For the trot it's the same, right seat with right leg, left seat with left leg. He said that it's easier for us to sit the walk because the horse's stride matches our own, so it's comfortable. But when they trot they extend their stride much bigger than ours, so if you can extend your "stride" to go with the horse, sitting the trot becomes effortless. The same applies to the canter, yes the canter is 3-beat, but you're following the hinds which are still on a 2-beat. Interesting, eh?

This explained to me the problem I'd been having with the sitting trot. I'd already been following the hind legs with my seat, which was fine at a slower trot, but because I hadn't quite understood the concept of making my "stride" bigger I'd get left behind at a larger trot. It's going to be interesting to play with this on the friesian.

The second demo was on low-stress round penning for horses that were difficult to catch. The lame little quarter horse mare was brought back out and let loose in the pen (buted up, obviously). He started by standing at an angle to her hindquarters, kissed and sent her gently forward, then he stopped and waited for her to face him. If she turned towards him he backed off, if she didn't he sent her forward again. In about 10 minutes that mare was turning to face him every time he stood next to her hindquarters and gave the cue. She'd probably walked about 20 steps for the whole exercise.

He then brought out another horse, a draft pony, who was incredibly pushy on the ground. Mark started out immediately by establishing his personal bubble, every time the pony got inside of it he got pushed back out. Then he'd lead him around and stop, ask the pony to back and stand, then do it all over again. Occasionally he'd stand and talk to the crowd, but whenever the pony moved a foot he put him back. It took about 15 minutes until that pony didn't move unless Mark told him to. 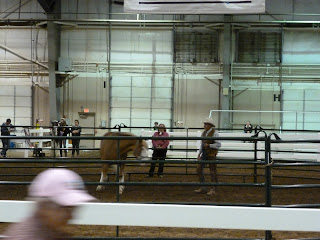 At one point Mark stopped and told us that he was teaching the pony something very specific. He was teaching him that when the handler stopped, the pony shouldn't bring his foot in the air past his foot that was already on the ground. He was telling the horse what TO do instead of what NOT to do. He stressed that this wasn't a "bad" pony, he was just doing what he'd been taught to do, no one knew how to show him any better. 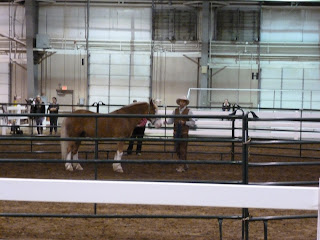 Sadly the pony reverted back to his original behavior almost as soon as the owner had the lead rope back in her hands. She really had poor rope handling skills, once you watched her you could see that the pony had no choice but to barge all over her. She held the rope very short, at the snap, and literally pulled him onto her every time she moved. That's why you should keep a float in the rope folks. I wish Mark would have had more time to work with the owner and show her how to handle the rope better, but there's only so much you can do in an hour and a half.

I'm going to quit for now before this post turns into a novel. For those of you intrigued by Mark Rashid, I encourage you to read Kate's clinic posts over at A Year With Horses, she does a really great job of explaining his methodology and training practices.
Ramblings courtesy of smazourek at 12:01 PM