I think I've mentioned before that I sort of stumbled upon my first client last spring. This was the first horse I've ever trimmed that wasn't my own; wouldn't you know that he's proven the most difficult. He's been on and off lame for the past 6-7 years, with frequent bouts of hoof wall separation, thrush, and, when I first saw him, ridiculously long toes that I've had to back up at every trim.

His case has been daunting for me as a new trimmer, he became much sounder after my first trim, then not so sound after the second, improved again after the third and then went totally lame. I was a bit flabbergasted and, to be honest, scared. So I made plans with the owner to get photos and ask for help online. When I got there I found out the owner hadn't told me about the massive separation that had popped out since his last trim which explained the increased soreness, but I took the photos anyway because I wasn't sure exactly how to tackle that separation.

Long story slightly shortened: I got the help I was looking for with the wall separation. BUT I found out something else interesting as well. Looking at the photos (note, these are pre-trim) it looked like his bars had grown faster than his hoof walls, something I don't think is physically possible. I wondered if what I was seeing was something Cheryl had talked about while I was in Oregon, that his bars had been left untrimmed for so long that they'd impacted inside his hooves.

This would explain quite a bit, for instance why this horse continually lands toe first (follow this link to Rockley Farm to read a good post about why this is bad). If the bars had impacted into the back of the foot then landing heel first would become incredibly painful as he would have been stabbing himself with the bars at every step.


Here's a picture from Ove Lind at the Swedish Hoof School that should help you visualize what I'm talking about. The impacted bar is on the left, shoving into the hoof and skewing the whole thing right. Can you see it? Now imagine how that must feel to the horse. Remember that the bar material is similar to hoof wall material, it is strong and stiff. If the bars are left to grow long enough they will begin to reach the hard, unyielding ground- forcing them upwards into the soft, yielding hoof of the horse where they pinch the bejeebers out of the inner structures of the hoof. Not to mention throw a wrench in the hoof mechanism.
When I trimmed his bars down the impacted material finally had room to migrate back outside the hoof to where they belong- explaining why it looked like they were growing so fast. (If any of you have spent time on Pete Ramey's site you can probably guess by now that I've got some issues with this article.)

So here's what I did when I trimmed him- took those bars right back down and recessed the separated wall 1/4 inch off the ground. The horse was immensely relieved, he'd been shearing his heels trying to get off that outside hoof wall, poor guy. He's now getting No Thrush treatment every day and soaks twice a week- gotta keep the baddies at bay! 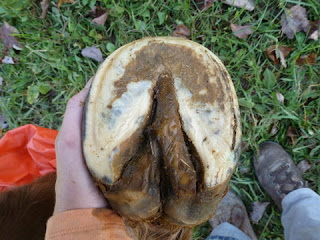 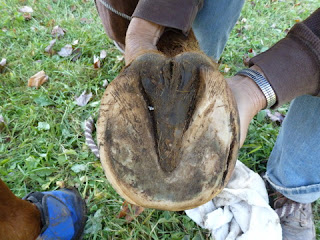 I'm very interested to see how he feels after my next trim. If the bars stop popping out faster than the walls can grow I'll know I've gotten all the impacted material out. If, after that, I don't have to keep lopping excess toe off at each trim I'll know he's landing heel first and will finally be on the road to soundness.

Once again: If the walls aren't self-trimming, the bars aren't either.
Ramblings courtesy of smazourek at 2:23 PM