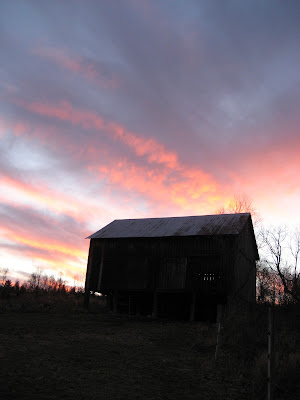 This is the only man-made shelter that has been available to my horses since I moved them in July. Has this been a bit of a hassle for me sometimes when it rains or gets dark early, or it rains after it gets dark early (like tonight)? Yes. Enough of a hassle to move them back into stall board?

I'm pretty sure my horses are the happiest they've ever been right now. Out in the pasture peace and tranquility flow off them in waves. What's funny is that I never realized how much both of my horses disliked stall life until they weren't in them anymore.

Gwen's distress was obvious. Her panic whenever she was left without a stall buddy was pretty explicit. Less so were her calls to me whenever I arrived at the barn. She knew the sound of my car, if the barn was quiet enough that she could hear it she'd be calling to me before I even got out. If the barn was noisy she'd scream to me as soon as she saw me (the other boarders always knew I was there, she made sure of that). I thought it was endearing, until she moved out to pasture and didn't do it anymore. That made me sad until I really thought about it. Every time she'd call to me in the barn it always had a note of panic in it. I think she was making frantic pleas to me to get her out of there.

Coriander was never as obvious as his sister, he practiced avoidance. For one thing, I'm pretty sure that he didn't stick his head out of his stall if I wasn't there. He'd grab all his hay and pull it into the back of his stall to eat away from the aisle activity. I just took these as signs that he was a little standoffish, but I've found out that he's really not, he's usually the first one to approach me in the pasture. And you should see him now with his pile of hay- he sets up camp in front of it, cocks a leg, and just chews away. He doesn't feel any need to drag his hay around. Not to mention that I'm still battling the horrible thrush he picked up from standing in those stalls.

Would they have had a different experience if it had been a nicer barn run by better people? Who knows. All I know is that tonight, while there was blowing rain all over the place, my horses were not standing under the shelter where it was dry. They were standing out in the open, waiting for me to bring their hay to them, and I was happy to oblige. 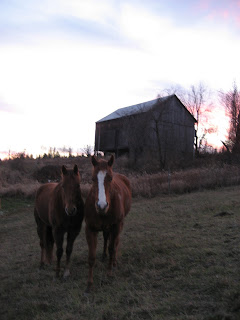 Ramblings courtesy of smazourek at 6:41 PM